Until 1803, the Place de l’Hôtel de Ville was known as the Place de Grève. Under the old regimes, it was a theatre of torture and executions, and it was also the meeting point for the unemployed. The expression of ‘se mettre en grève’ originates from this place (to go on strike), although at the time it was known as a place to find work, and not to protest against working conditions. Etienne Marcel, the Provost of the Merchants of Paris under the rule of Jean Lebon, had to arrange for various municipal institutions to be located here, such as the house of ‘Aux Piliers’ in 1357. This was replaced by a luxurious palace during the Renaissance, and it was further expanded and enriched during the reign of Louis-Philippe. This building housed a number of very precious archives, which were smoke damaged during the era of the Communards. The Hôtel de Ville was entirely destroyed by flames, and it was rebuilt in 1882 – the new design was virtually identical to the old one. Today, the building sports a fascia in the Néo-Renaissance style, where 108 niches shelter the statutes of famous people that were born in Paris. The interior is sumptuous, and people can discover it for themselves by attending exhibitions there – it is also possible to see it by visiting the Conseil de Paris that is open to the public. 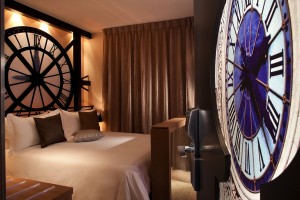