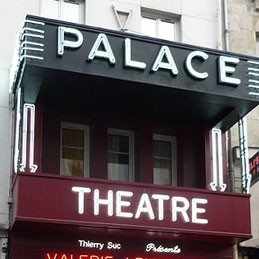 Some legends rise, then fall, only to rise to more dazzling heights than ever: that’s the story of the Palace. A music hall in 1923, it became a cinema in 1946, before briefly becoming a theatre between 1975 to 1978. Under Fabrice Esmaer, it was one of Paris’ trendiest nightclubs, in its heyday attracting the likes of Kenzo, Karl Lagarfeld, Thierry Ardisson, Andy Warhol and even Mick Jagger.

When Esmaer died, the Palace slowly declined until squatters moved in in 1996. Finally, after more than a decade’s closure and 18 months of refurbishment, the Vardar brothers took it over in 2007. Now, as in the 1930s, this mythical venue is a theatre once more. In 2008, actress Valérie Lemercier made her comeback, after a 6 years out of the limelight. The adventure continues.