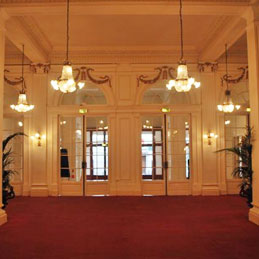 The former Folie Richelieu is still the champion of popular shows. For more than a century, many big names have come through here : Belmondo, Hossein, Georges Wilson, Alain Delon et Romy Schneider… More recently, Bernard Tapie starred in One Flew Over the Cuckoo’s Nest, directed by Christelle Durand.

The Petit Théâtre was a converted former costume workshop. In 1958, the doors opened on the new Théâtre Moderne, which can hold up to 300 people. In 1992, it changed its name to the Petit Théâtre de Paris, a venue dedicated to revealing up-and-coming young talent. At 15 rue Blanche, the stars of tomorrow – comedians, directors and writers – get their chance to shine.

The theatre is part of Théâtres Privés de Paris association. Reduced price tickets are available for the under-26s under as part of the « premiers aux premières » scheme